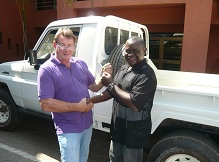 Azumah “Zoom Zoom” Nelson, the only African boxing Hall of Fame inductee, reminds not only Ghanaians and Africans of his glorious days in the ring from the 80s through the 90s, but also attracts the admiration of Australians alike.

His Aussie admirers include Mr. David Harper, CEO of Geodril Ghana Ltd, a reputable Ghana-based mining drilling company who witnessed the previous memorable fight in 1992 when the Boxing Professor demolished their idol, Jeff Fenech, in an eighth round KO in his own backyard, Melbourne.

Ever since, Mr. Harper has followed with keen interest the exploits of both ex-champions until they were both deservedly inducted into the Boxing Hall of Fame.

To him, Professor Nelson’s high sense of discipline and professionalism, fortitude and strength and, above all his “can-do–it” spirit, are sterling qualities everybody worth his or her calling must be proud of.

“On that night, we learnt a great lesson that the spirit of man knows no boundaries. I was therefore not surprised to hear that the legend is meeting his old foe and my compatriot, Jeff Fenech, once again in Melbourne in a charity rematch dubbed “The Final Round,” Mr Harper said.

The Geodrill CEO has decided to travel back to Australia where, in spite of his nationalism, he would be rooting for, Barima Azumah Nelson on June 24.

“In a conversation with Mr. Ray Quarcoo, a renowned sports enthusiast, whose association with Ghana boxing is well recognised, I mentioned my intentions and he arranged for me to meet the Professor before his departure. Off the rings, he is so gentle and kind at heart. I assured the Professor of my support and presence at ring side for the fight,” Mr. Harper added.

Azumah in turn promised that he was going to Australia as an Ambassador of Ghana and also to thrill his numerous fans there as well as bring victory home to dedicate to underprivileged children in Ghana.

Meanwhile, Geodrill Limited is partnering the Bridge Foundation, a non-profit Organization, to promote sports development among the youth.

“As a corporate responsibility for working in Ghana, and for my own personal interest in sport, Geodrill Ghana Ltd will extend its support to sustain the TBF initiative in years to come, hoping to unearth another champion in the make of Barima Professor Azumah “Zoom Zoom” Nelson,” Mr. Harper said

Geodrill supports Kylie Fulmer is her quest to be World Champion